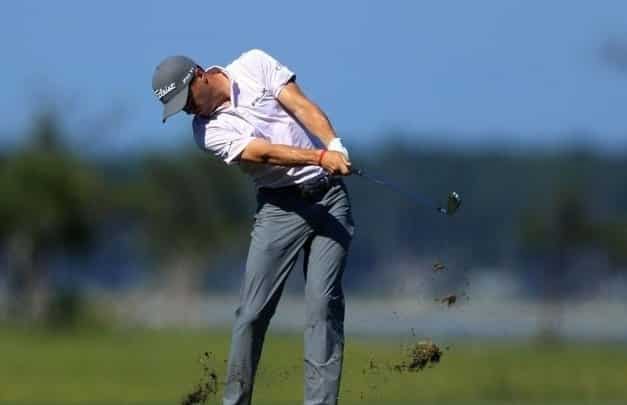 The release in golf is aptly named: it is the point where all the pent-up energy accumulated during the backswing, coil and rotation is now ‘released’ through the golf ball as the club moves through the impact zone and into the follow through.

If done correctly, the result could be a good shot. Perform it poorly, however, and you’ll likely end up with the opposite result.

So, how do you release the club properly in golf?

To successfully release the golf club, you should allow it to naturally follow the rotation of your body, reaching a position where the toe is pointed up when the shaft is parallel to the ground and in-line with your target after impact. This position shouldn’t come through a rotation of the wrists, as it may end up de-lofting the club, closing the face too early, and pulling shots to the left.

If you want to know the nitty gritty steps to successfully releasing the golf club, keep reading – I’ll answer all the questions you might have about this key part to your swing.

What is the release in the golf swing?

The release is more or less the section of the golf swing that occurs between impact and when the club reaches a parallel position to the ground, before eventually transitioning into the follow through. It is the action of allowing the toe of the clubhead to naturally close after contact with the ball.

Many players, especially amateurs battling a hook, make the mistake of not allowing the clubhead to release through the ball for fear of hitting it way left.

This often results in them holding the clubface open through impact and ‘steering’ the ball in attempt to control its direction, which will usually produce an undesirable slice.

Now, the golf swing has endless ‘sections’ to it, such as the takeaway or downswing, and focusing on each particular part is a recipe for head worms that can paralyse you with anxiety and doubt.

However, the release is a very ‘feel’ dependent part of the golf swing and understanding what to feel should give you freedom from a clouded head, not one filled with copious swing thoughts.

The main objective, like most things in golf, is to work out whatever the thought or feel is that gets you to perform the action in the most efficient way (and below I’ll explain some tips that may help you achieve this).

How do you fully release the golf club?

To fully release the golf club, you want to swing through impact and allow the club to naturally turn and rotate with your body, letting the toe to point up to the sky after you’ve struck the ball. This will see your thumbs pointing skyward and your wrists forming a V-shape, minimally crossed over.

It is important to recognise that this action is your standard release for someone with a fairly neutral grip.

While most people aspire to play golf with a neutral grip, it isn’t always the case and if you grasp the club stronger or weaker than normal, then this might affect your movements through the release.

If your grip is strong, you may need to hold the hands off a little longer to avoid a release that puts the clubhead in an overly closed position (which can lead to a hook).

Play with a weak grip, and you’ll likely feel like the wrists have to work over a tad more to avoid blocks or slices.

A good thing to look for at the beginning of the release – through impact – is that the hands sit over the left foot, causing the club shaft to lean forward.

This position will help to compress the ball, strike down on it and stop you ‘flipping’ through impact and the release – something that will lead to a poor strike.

From this position, with the shaft leaning forward through impact, it will allow you to ‘throw’ the club out in front of the body while your turn and rotation brings it into the perfect position: parallel to the ground, toe up in line with the target, and without the wrists overly crossed.

How does it feel to release the golf club?

Releasing the golf club should feel like a natural movement where the club and its energy follow the natural rotation and movement of the body through impact. There shouldn’t be an excessive feeling of wrist rotation, nor should it feel as if the club is being ‘flipped’ through the ball.

As mentioned earlier, this feeling of ‘wrists remaining upright and apart’ is definitely aimed towards those with a neutral grip – but even if you err on the strong or weak side, an early roll of wrists will close the face and cause shots to skew left.

If you do play with a super weak grip then a little wrist rotation might be required to marry the club up with your target line, but filming your swing or getting advice from a pro is probably a good idea to make sure your feelings and your reality are actually aligned.

Should you roll your wrists in the golf swing?

Ideally, you shouldn’t be rolling your wrists too much in the golf swing. Through impact and the release of the club, the wrists should stay fairly parallel to each other and not roll over to the point that they are facing one another. If you find that you need to roll your wrists to make the ball go straight, you might have issues with your grip.

There are obviously exceptions, like using rotation to help shape the ball, but the wrists should stay facing one another for large parts of the swing.

The action you need to think of, regarding wrists, is less of a roll and more of a hinge.

You definitely need to get the wrists active in the golf swing, don’t get me wrong, but hinging on the way back, unhinging through impact, then hinging again on the way through is a far better way to think of it than a roll back and forth.

We’ve written a complete guide to the proper wrist hinge that I definitely recommend you read here.

How do you release the golf club without flipping it?

To release the golf club without flipping, it is crucial to have some shaft lean through impact so that your hands stay ahead of the clubhead. This will stop you feeling the need to catch the clubhead back up to the hands, which triggers the flipping motion with the wrists.

By keeping the hands in front of the clubhead through impact – think ‘hands over left foot’ – it holds the club off long enough that you need a good release and rotation to get the shot coming out straight, as opposed to losing it right.

In the case of a flip, this rapid wrist movement is an attempt to catch the clubhead up to the ball, possibly caused by anxiety that creating shaft lean will lead to chunks or hooks.

By accelerating the clubhead through the ball so that it is in front of the hands at impact, you’ll deliver too much loft and bring about misses high and to the right (rather than a nice fade).

Releasing the club without a flipping motion also requires a clubface that isn’t too open, given a flip is often a remedy your body subconsciously uses to square the clubhead.

If you have a weak grip or swing fault causing the clubface to be too open at impact, a flip is an effort to square things early in the swing.

A flip can also be a symptom of a golf swing that is too steep, where you fear that a leaning shaft will cause huge chops down on the ball and massive divots.

Shallowing out the swing will help you feel as if the strike, with a forward leaning shaft, is just the right amount down, so you’ll feel comfortable making a release through the ball, rather than a flipping motion.

We’ve written a complete guide to shaft lean and clubface control that is well worth a read if you struggle with this part of your swing.

What happens if you don’t release the golf club?

If you don’t release the golf club, you’ll most likely hold off the hands and lose shots to the right. Often people who are afraid of hooks will push the hands through impact to keep the clubface square, but when you do fix the underlying issues causing the ball to go left then failing to release will see you slice or block the ball.

This has been a constant battle for me in my own swing, as a takeaway that was too far inside led me to develop a terrible case of the hooks.

After some time working with a pro, I managed to fix this, but was left with lasting anxiety about fully releasing the club around my body.

I held my hands off and with the new takeaway began hitting blocks and slices.

So, for people struggling with losing the ball to the right, releasing the club – and even rolling the wrists through the release – will be helpful to try and bring the ball flight back to something straighter.

However, you have to be wary of this when you do fix the underlying problems in your set up or backswing, because they may just expose problems in your release or follow through that were remedying your previously ingrained faults.

The release is a largely mental part of the golf swing, with many players being wary of wrapping the club around their body in the follow through, leading to a desire to ‘steer’ the ball down the fairway.

If you find a full release and rotation causes hooks, then you need to look at the earlier parts of the swing, as you should feel confidence that a full release will see the ball come out on the right line.

As always, what feels like flipping or rolling of the wrists might be very different to reality, so spend some time experimenting or even get some help from a pro and you’ll no longer fear that beautiful release and finish, with the club resting on your left shoulder and the ball soaring down the middle of the fairway.