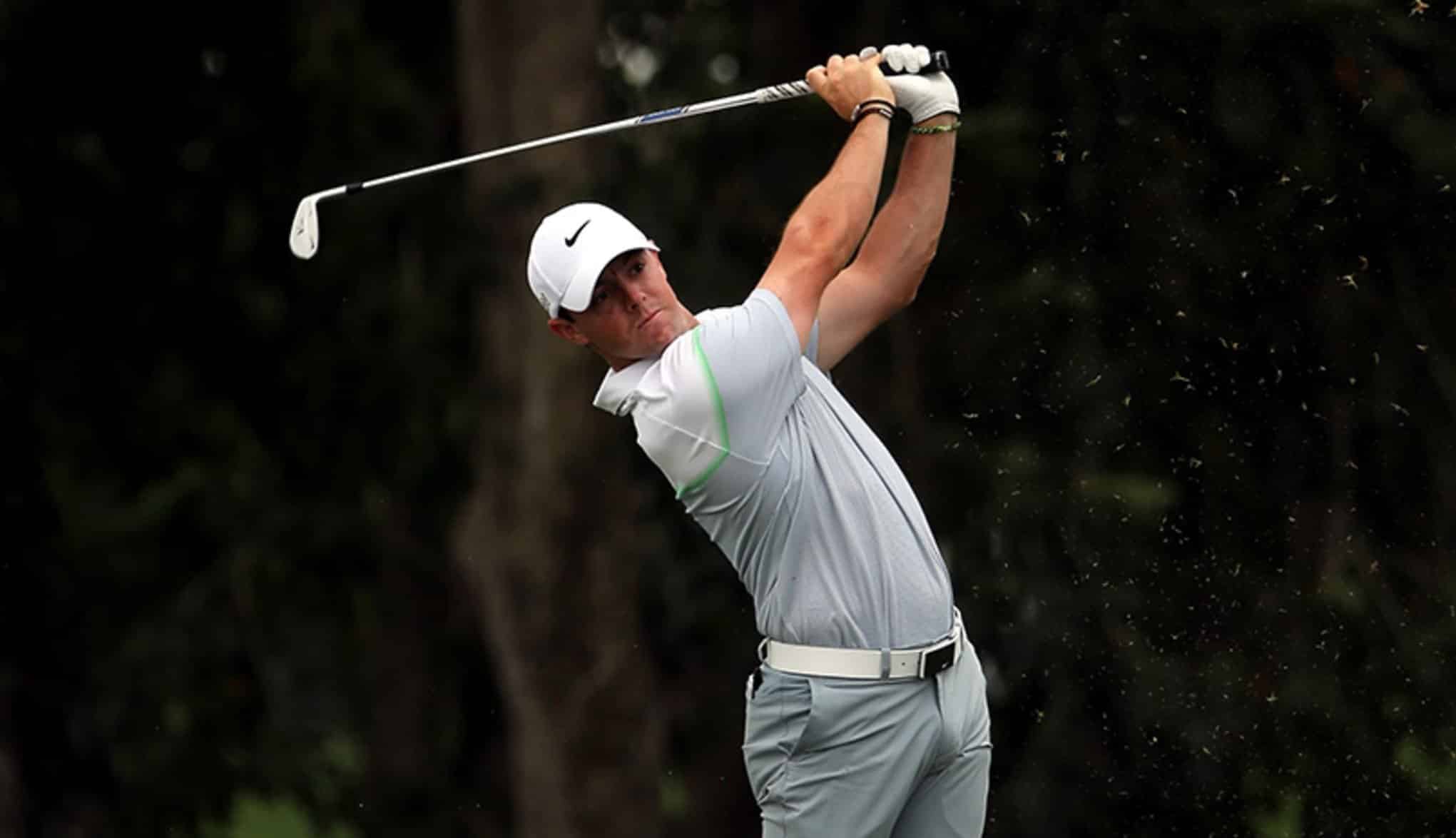 For many golfers, hitting the longer irons – the 3, 4 and 5-iron – well, is extremely challenging.

You feel super comfortable with a 9-iron in hand and confident with a 7-iron, yet sneak a little lower in loft to a 5-iron and the anxiety sets in.

The filthy chunks. The handwringing thins. The inconsistency people experience with long irons often leads to them trekking down to their local store and replacing them all with hybrids.

I’ve been tempted to do this myself on occasions when things haven’t been working in my own game.

So why does the average golfer struggle with long irons while the pros seem to hit them high with ease and stop them on a dime?

Hitting long irons well requires you to do the following:

While you’ll never quite hit a 3-iron like Tiger Woods (and may benefit more from using a driving iron), follow our simple tips in this article and you’ll find those longer irons become an asset, not a hinderance, out on the course.

What is a long iron and how do I hit it well?

Most people consider anything less-lofted than a 6-iron to be ‘long’, so for most golfers this would be a 4 or a 5-iron.

It would be rare for your average golfer to carry a 3-iron or a 2-iron, and they are clubs that should probably be reserved for highly-skilled players.

Long irons are perfect for threading a tight tee shot down a short Par 4 or finding the green on the long Par 3s that span 200 yards (180 metres).

Accompanied by a booming driver, a high calibre long iron player might be using them to reach the green in two on a Par 5.

Ultimately, long irons are a club that must be mastered by anyone hoping to be a low handicap golfer.

While hybrids are an adequate replacement, they don’t have the same flexibility of a long iron, something I’ll discuss later.

If you want to hit your long irons well, ball positioning is key and it must sit slightly forward of centre to promote a shallower attack angle. Additionally, it’s crucial you dial back the tempo. Fast swings result in lost shape, so a smooth, effortless rotation will yield far better results. Finally, lateral movement is a killer with long irons. Keep still and rotate, don’t sway, and you’ll improve your chances of contacting the ball clean every time.

I’m going to elaborate on each of those key tips – all of which have helped me dramatically improve my own long iron play – in more detail to get you striking the ball pure each time.

There’s two errors people can make, somewhat obvious ones, when positioning the ball for a long iron shot: having the ball too far forward or too far back in the stance.

Ideally, a long iron shot should be performed with the ball a tad forward of centre in the stance, around a ball width in front of middle.

Some people are prone to taking this too far, playing a 5-iron with the ball nearly inside their front heel, almost like a driver.

While the ball needs to be forward, too far forward is a killer, as your swing arc will shallow out too early and be on the rise at contact.

This will only promote upward contact and thin strikes, also a reason why people may struggle to get height with their long irons.

Similarly, positioning the ball too far back in the stance can be equally as damaging.

To hit the ball, you will need to come down steeply from the top of your swing, sending the clubhead on a downward path into the turf.

This will result in chunky contact and a shot that doesn’t go very far.

In order to make contact at the right point in your swing arc, setting up with your ball just forward of centre in the stance is the best strategy.

Tip #2: Attack at the right angle

This links in nicely with ball positioning, but is as much a mental element or ‘feel’ as it is set up or execution.

While people often say you need to swing a 5-iron like an 8-iron – which I’ll talk about in the next tip – if you attack the ball in the same way you are likely to catch it fat.

The divot you take with a long iron should be shallower and less prominent than that of a shorter iron.

If you come in too steep with a 5-iron then the club will lose momentum into the ground and won’t carve back out of the turf like a 9-iron or wedge will.

The long iron shot is more of a ‘sweeping’ stroke and many players will barely scuff the ground, rather than take a divot, when playing with a longer club.

One thing to note here, however, is that the strike on the ball with a long iron should still be downward.

Many players get sucked into the idea of needing to hit up on a long iron to launch it into the air – an approach that is completely wrong.

While the attack angle should be shallower than that of a 9-iron, it should still be a downward one, allowing the loft of the club to do the work and send the ball sailing into the air.

One of the biggest mistakes people make when hitting a long iron is that they swing out of their shoes, believing a high swing speed is required to pure a long iron like the pros do.

While speed is important, unless you are a senior golfer you probably naturally swing the club plenty fast enough to strike a long iron effectively.

If you are an older golfer and swing quite slow, it may be the right time to transition to hybrids.

Tense, rapid swings are unpredictable and lead to inconsistent fat and thin shots. People often get snappy at the top and transition way too fast, causing the arms and hips to lose connection with one another.

To pure a long iron, your backswing should be smooth and controlled, with a slight pause at the top, not a snap, to move between backswing and downswing.

The follow through should be full and free of tension, allowing the club shaft to rest on your lead shoulder after making a full turn.

You should feel as if you are swinging an 8-iron, however make sure your ball positioning and attack angle are adjusted accordingly for the long iron shot – as described earlier – so you don’t come in too steep and strike the ball chunky.

Similar to tempo, the mental belief that a long iron must be forced out there a long way with extra grunt and power is just plain wrong.

In that search for extra speed and distance, many people sway back off the ball to find those extra five yards.

What this actually results in is an inconsistent strike and a ball that travels 40 yards less than if you just swung smoothly anyway.

Focus on a smooth backswing and a full turn of the hips off the ball, rather than a sway and transition of weight into the back foot.

Through the downswing it’s the same thing: turn the left hip out of the way to release the club, rather than sway through the ball to try and help launch it far and high.

All the while your head should remain in the same position until your follow through.

An excellent drill to improve your long iron play, shown in the video below by PGA Pro and YouTuber Rick Shiels, is to start off by hitting them on the range with a tee.

One of the biggest fears for players hitting long irons is the interaction with the turf, so using a tee will help alleviate that pressure and stressful feeling while you work on your swing.

What it will also help to do is promote an ‘upward’ strike and counteract steep swings.

Now while you should not be hitting up on long iron shots, as I mentioned earlier, this drill is to develop a feel that will eventually translate to the correct attack angle off the turf.

For players who swing too steep, practicing sweeping the ball off a tee will help to shallow the swing.

As you gradually lower the tee until the ball is placed on the turf (or range mat) you will get closer and closer to that slightly negative attack angle, perfect for launching a long iron.

See the drill in the video below:

How to hit high vs low shots with long irons

One of the best things about long irons is the variety they offer.

Long irons – whether they’re a standard 5-iron or a driving iron – can be hit high and long, holding a green from 200 yards away.

They can also be worked and shaped with scrambling punch shots to save a par.

To launch the ball high, ball positioning is key.

Sneaking the ball forward a little in the stance – but not too far – will help launch the ball high in the air.

It is also crucial to ensure you open the club face up enough in your backswing, a habit I have been trying to form, as a closed face with a long iron can be especially damaging, resulting in vicious duck-hooks.

If you want to hit a lower, punchier shot, play the ball a little back in your stance – but again, not too far back.

A ball or two behind centre, not off the back foot, is best.

Your backswing can be longer or shorter to control the distance you want the ball to go, meanwhile your follow through should only reach parallel.

This will help keep the ball low and sneak under any pesky tree branches obscuring your shot.

Long irons vs hybrids: Which is better?

You’re probably asking: why even bother with a long iron when hybrids can do much the same with extra forgiveness?

While hybrids are great clubs and recommended for any amateur or social golfer, they don’t quite offer the same range of shots as long irons do.

Long irons can be hit high onto greens or kept low into the wind. They can be great out of fairway bunkers or shaped low around trees.

Hybrids are excellent clubs for promoting consistency through forgiving design, but you might find they just don’t have the same ability to work the ball or be kept low into the wind or under trees as they are built to get the ball into the air easier.

For slower swinging golfers, hybrids are possibly the best option for you and you can swap these in for long irons.

For any relatively fit golfer who swings the club with decent speed, both long irons and hybrids should probably feature in your bag if you have the room.

Long irons are some of the most feared and unforgiving clubs in the game, but this need not be the case.

Work on your ball positioning, attack angle, tempo and fight the sway – as I’ve described in the simple tips above – and you will be launching these clubs high, long and consistently for years to come.