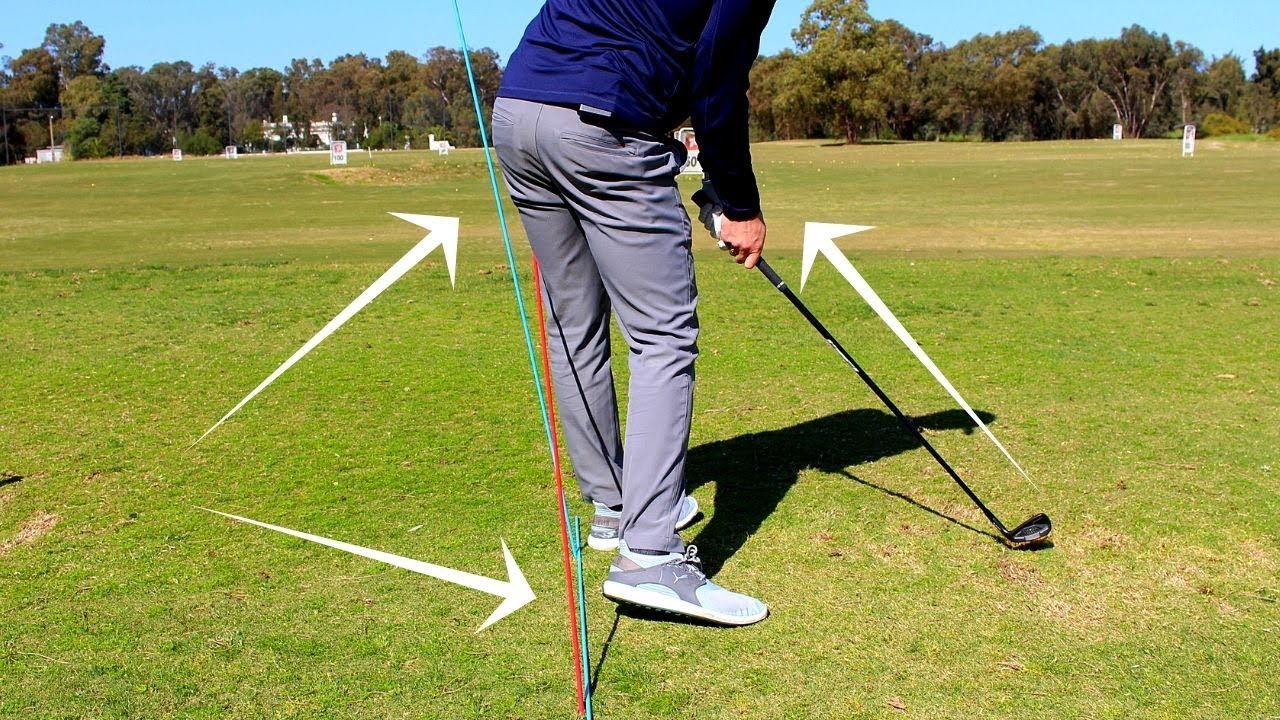 There are so many swing killers in golf, but few are as impactful as early extension.

Frustratingly for many players, like myself, this common swing fault among amateur players is usually very easy to diagnose, but can be difficult to fix without the right guidance.

Trust me, I know. For the first 18 months of my golf journey, I admittedly didn’t get much better. But I soon got sick of shooting over 100 every time I played, so I began searching for answers.

It wasn’t until I started videoing my swing and comparing it to the pros that I realised I was doing something obviously wrong – and that was early extending.

So, what is early extension?

Early extension is when a golfer thrusts their hips towards the ball during the downswing, rather than rotating towards the target while maintaining their spine angle. Signs that you are early extending include ‘standing up’ at impact, having locked straight arms at impact, and your pelvis facing the ball rather than being open at impact.

When I looked back at footage of my swing, the diagnosis was clear: the standing up, the locked arms, the square hips were all tell-tale symptoms of early extension.

My search for a cure took me to the deepest, darkest corners of the internet – to many blogs and YouTube videos – and finally after much research, and some lessons with a qualified golf instructor, I found enough helpful tips that allowed me fix this troublesome swing fault.

In this article, I’m going to share with you everything I have learned about early extension including what causes it and how you can fix it.

What causes early extension in golf?

Because early extension is such a common swing fault among golfers, there are many, many different factors that can cause it.

A big misconception is that early extension comes from a lack of rotation, but I can say with certainty – having tried to fix my own faults by simply trying to rotate more – that this is not always the case.

In fact, to state there is a one-size-fits-all reason for why you early extend is plain wrong.

Instead, early extension is typically caused by one, or a combination, of the following swing flaws.

Let’s take a look at them in more detail.

Balance is arguably the most important, fundamental element of your golf swing.

Without balance, it becomes virtually impossible to strike the ball consistently.

And, as you may or may not know, a bad set-up position can attribute to awful balance, and as a result lead to you early extending.

The reason why is this:

The best ball-strikers in the world have one thing in common: they all shallow the golf club (let it lag behind them as they begin their downswing).

One of the most common problems amateurs have is they tend to bring their arms out in front of them as they start their swing, steepening the shaft as they arrive at impact and causing them to early extend in order to make contact with the ball.

Often, the root cause of this type of early extending is the club position at the top of their backswing – especially when they are ‘flying their elbow’ out from their body.

The reason why is this:

Golf instructor Peter Finch explains this really well in the video below:

What you may not realise is that professional golfers are extremely flexible and naturally athletic.

Even someone like John Daly, who may not look the fittest, has incredible range of motion in his swing.

The average player, on the other hand, isn’t able to spend eight hours a day doing yoga and Pilates to improve their flexibility, and as a result may be a little more restricted with their movement.

How does this cause early extension? Here are some reasons:

So now that you know what causes early extension, it’s time to explain why it can wreak havoc on your swing if not corrected.

It’s important not to confuse early extension with extension as they are two very different things.

As Adam Young Golf outlines in this extremely detailed and informative article, every professional golfer extends – but it is the timing of that extension that is the key to producing a great swing.

As they noted in their analysis, most Tour players will squat down and lower their head slightly as they begin their transition from the top of the backswing, before extending up through impact once their hips have cleared out of the way.

Where amateurs are different is that they often forget this all-important squat during their transition – as a result, when they extend up through impact, their head has risen higher than what it was during set-up.

The consequences of this are wide-ranging but can include inconsistent ball-striking (fat and thin shots), club face control and swing path control (both of which can lead to hooks or slices).

Golf instructor Monte Scheinblum explains this extremely well in the below video:

How do I know if I’m early extending?

The best way to diagnose whether or not you are early extending is to see a qualified golf instructor, who will be able to guide you on how best to cure your swing fault (I’ve explained why getting lessons is extremely important to helping you improve faster in another article I recommend you read).

But if you don’t have the time or money to see an instructor – golf can be expensive after all (although there are ways to get started on a budget) – then videoing your swing is the next best thing.

To do this, all you’ll need is your phone, a tripod and a holster for your phone – both the tripod and holster are easy to grab off Amazon.

Alternatively, you can purchase this cool bag clamp which easily attaches your phone to the top of your golf bag – it’s super convenient and doesn’t cost too much.

Once you’ve got everything you need, this is what you should do:

If you analyse your swing using the steps above and determine you are suffering from early extension, keep reading – because it’s time to reveal how to eliminate it.

How do you get rid of early extension?

I’m going to be upfront with you: if you’ve suffered from early extension for a long time, just like I did (and sometimes still do), it’s going to take lots of repeated practice to make the right changes in your swing.

Before I detail some great drills you can do to help eliminate early extension, there is one thing you must get right before hitting any balls: posture.

As I explained at the start of this post, correct posture at address is key to maintaining a balanced swing – and if you’re balanced, you’ll be less likely to early extend.

In order to achieve the correct set-up position, follow these steps:

Setting up in this manner will give you the most neutral address position possible and assist greatly in helping you maintain your spine angle as you swing through the ball.

Now that you’re nice and balanced, it’s time to get practicing.

As mentioned above, early extension is commonly brought about by three things: failing to shallow the shaft correctly, a poor backswing position and physical limitations (especially with hip and shoulder rotation).

Correcting these three things will go a long way to eliminating your early extension which, as we’ve discussed, is usually a bi-product of other swing flaws – rather than an isolated fault.

Here’s three drills that will help cure you of early extension forever.

Shallowing the golf club and letting it lag behind you can feel very strange for amateur golfers, especially those who use mainly their arms – and not body – to hit the ball.

The Wall Drill from Me and My Golf is a perfect way to feel the correct movement in the downswing.

To practice this drill, which you can easily do at home, simply:

Check out the drill in the video below (from the 4.30min mark):

Getting your trail arm to work inwards and not outwards is essential for delivering the club nice and shallow into the ball, and avoiding the need to early extend in order to counteract a steep shaft as you make contact.

This drill from Alastair Davies gives you great visual and physical feedback on where your trail arm should be at impact.

To practice this drill, simply:

Check out the drill in the video below (from the 4min mark):

One of the keys to prevent early extension is making sure your hips stay back during the downswing, rather than thrusting towards the ball.

Once you’ve learned how to shallow the club and use your trail arm correctly by doing the drills above, it’s then time to work on using your hips the right way.

This simple drill from Adam Bazalgette is a great way to learn how to keep your pelvis back as you swing, leaving room for your arms to contact the ball and preventing early extension.

Here’s what you need to do:

Check out the drill in the video below (from the 6.40min mark):

Can you play good golf with early extension?

Many golfers still hit the ball well, and score well, despite having early extension in their swing – however, most of these players likely have excellent hand-eye coordination or have made their technique work for them through lots of repetition and practice over time.

While early extension won’t stop you from playing decent golf, to create pro-like ball compression and consistency you need to eliminate it from your swing as best you can.

Does early extension cause shanks?

Early extension can certainly cause shanks. When you early extend, you thrust your pelvis towards the ball, often dropping the club way under the swing plane. This severe in-to-out club path may cause the hosel to make contact with the ball first, rather than the club face, resulting in a shank.

Early extension can be easily fixed once you identify its root cause.

Simply trying to rotate more, or maintain your spine angle, without first addressing your set-up and backswing positions may actually make it harder for you to make contact with the ball.

Addressing the ball with the correct posture, and training your trail arm and body to move in the correct way by using the drills above, will go a long way towards eliminating early extension in your swing – and get you shooting lower scores in no time.